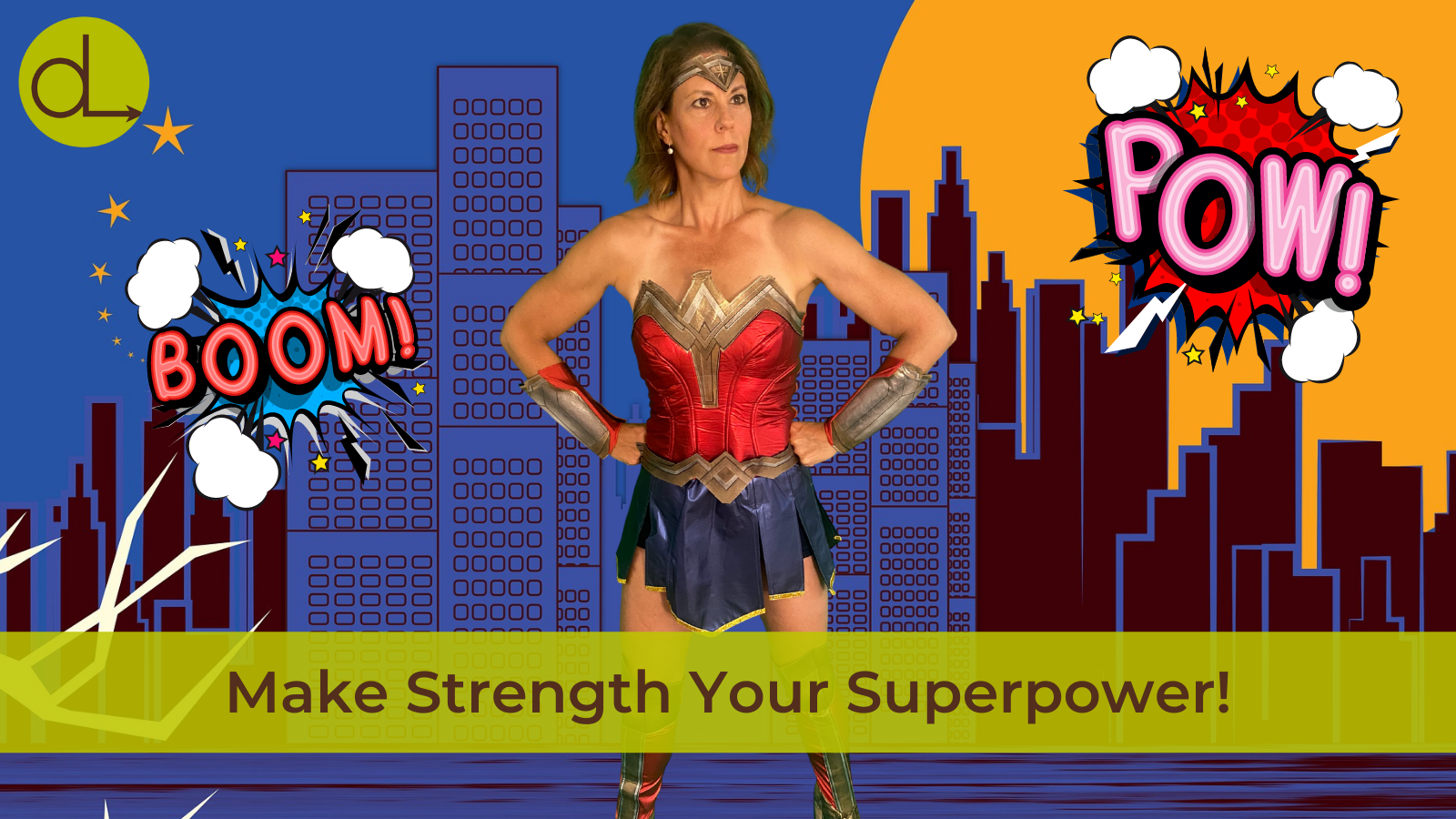 Not All Heroes Wear Tights

My girls are excited to see his newest movie, Free Guy! A story about your average Joe who courageously chooses to be the hero of his own story, despite being just a “background player.”

We may not be running around saving the world from evil supervillains, but each of us can choose how we show up to our challenges in and out of the workplace.

What makes a hero a hero isn’t their tights or even their physical strength (though, I’m sure having these things doesn’t hurt). Their heroism, as Ryan Reynolds’ character “Guy” will tell you, comes from their internal Strength. Their ability to choose consciously how they show up to their challenges.

That same quality is what makes a Thoughtfully Fit leader in the workplace.

During quarantine, while facilitating a virtual Thoughtfully Fit Increase Your Impact series, I met Mia.

Like many of us, Mia was feeling overwhelmed by the pandemic. In addition to managing her own work, she also had to look after her kids and make sure they kept up with school. All this from a home that was packed like an episode of Full House—six people and three dogs.

It would’ve been enough to overpower even the strongest hero.

Still, she put on a brave face for her employees and her family. That’s what leaders (and parents) are supposed to do, right? Whenever someone asked how she was doing, she’d respond, “Fine!” I mean, what other choice did she have?

Ultimately, though, that didn’t make her feel like a leader. Instead, she felt dishonest, exhausted, and alone.

Mia felt like there were only two options—either wear a mask of bravery or completely break down in front of her team and family. The reality is, there are a slew of choices available to us when it comes to how we show up to a challenge. Mia just had to unlock them.

People problems aren’t just in the workplace. Try wearing your supersuit around the house…

Some of you may have been following on the blog and the weekly newsletter that we send out, that I have been having a pain in my butt, literally, where I am running and it shoots down. It’s not my piriformis, I’ve had those issues in the past, but it shoots down the back of my glutes into my upper hamstrings. And it’s awful. What I want to do intuitively to fix it, is to stretch that muscle. That feels like that’s what’s going to make it better, but I did that for a long time and it didn’t get better.

Long story short, I finally went to a physical therapist, and lo and behold, the path to recovery has nothing to do with stretching that muscle that hurts. It is a whole different point in my mid back and my glutes that’s causing the problem, called my lateral femoris. There’s two terms for it. Okay, my PT told me that and it doesn’t make any sense to me, first of all, and it was a total blind spot. After she pointed it out, I’m like, “Oh yeah, I have been sitting a lot,” because I’m not going out to different events and everything. And so, “Oh, that makes sense. Why that would be tight,” but then I have to do this other exercise, even though that feels counterintuitive. And she’s like, “Yep.” Well, needless to say, it’s helping, it’s making a difference. It wasn’t something that I could see on my own, even though I was trying really hard.

That is similar to what I experienced working with my coaching clients. They come into a coaching conversation and they’ve got a problem, and they have tried to fix it by focusing on the things they think intuitively are the best way to fix it. And it’s not getting better just like my pain in my butt. And I point out and explore a different area that probably is, well it does, turn out to be creating the problem in the relationship. It is just fascinating to see the parallels here. Let me give you an example. I was coaching with a client who was very frustrated with one of his colleagues on the executive leadership team. And he will say, “I’ll take care of it.” And it’s not something that he knows how to take care of in the moment, but he says, “I’ll take care of it.”

My client had no idea that was a whole different perspective that he did not see. And he kept on telling this, his colleague, how frustrating that is and how he needs to talk more about the problem and be vulnerable. And unfortunately, in the way that he was delivering that message, it was pretty aggressive and blamey. And his colleague, instead of talking through it, got defensive, and didn’t get to the heart of the issue. And eventually, through digging and peeling a few layers of the onion away, and really working to create psychological safety, they were able to have a conversation, where the one person said, “This is really frustrating to me. And it makes me feel like you are avoiding some tough conversations, or you’re wanting to make it sound like you have everything taken care of. And instead of leaning on the leadership team to help you brainstorm and solve the problem.” To which the other person then shared, “I’d love to be able to bring that up to the team and share, but that’s not what the president wants and he’s told me that. He said, “Just fix it, take care of it.” I don’t know what to do or how to do this.”

The two of them worked together to figure out and make a plan on how to address this situation with the president, so that then they could bring it back to the full team. And lo and behold, it worked, just like my exercise I’m doing with my physical therapist that I would’ve never thought to do are working. I’ve got so many different examples of this, so what’s the point?

We have blind spots. We don’t know what we don’t know. And many of us, and many of your colleagues that you’re frustrated with, are doing the best they can. Lean into the courage to say how you’re feeling, with compassion, so somebody can hear it, and then the curiosity to say, “How do you see it? What’s your point of view?” Because when you can step into and invite other perspectives, it’s like seeing in that rear view mirror, where you can’t see there’s a blind spot, you ask somebody, they can fill in the holes and fill in the blind spot. That’s your workout. That’s your thoughtfully fit workout this week. Be curious, and ask others for another perspective if you’re feeling frustrated, and you’re feeling stuck.

Thank you so much. I’m Darcy Luoma. I love when you join me and listen to these thoughtfully fit tips. I would love to hear your comments. If there’s ways that you feel blindsided and what do you do to be able to step into and find new perspectives. All right. Take care everybody. Bye. Bye.

Find Strength by Unlocking Your Choices

The challenges and villains that heroes face can strike fear in them, and often do (I mean, have you seen the joker? Chills!). But in their final battle, heroes make the conscious choice to override their fear and show up intentionally with courage.

Similarly, Thoughtfully Fit leaders can prevent stress and frustration by strategically choosing their actions and how they want to show up to their challenges. The first step is unlocking the choices. When we aren’t aware of all the choices we have available to us, it can limit our ability to Act intentionally.

How do we unlock our choices? By engaging our Thoughtfully Fit core.

When we take time to engage our core—Pause and Think—before fighting our battles, we can unlock the choices we have. Then we can show up to our battles with Strength and Act thoughtfully.

Fighting Your Battles with Strength

We may not be up against some bad guy or fighting a supervillain, but our workplace challenges can make us feel just as intimidated or powerless. However, like heroes, we can override that feeling and choose how to respond.

Maybe your challenge is a staff meeting. Depending on the agenda, they can be just as horrible as the joker. The next time you’re feeling stressed about a meeting, keep that feeling from taking over your actions. Unlock your choices by asking yourself, How do I want to show up?

Your choices may include showing up:

By taking time to unlock the choices we have, we can choose consciously how we want to show up to the battles that test our Strength. Moreover, we can take thoughtful steps forward to prevent ourselves from reacting purely out of emotion.

The Power of Strength

After exploring all the options, Mia chose to show up with more honesty and vulnerability. She resolved to stop saying she felt “fine” when she didn’t. She decided to be more open with her kids and colleagues about her frustrations and expectations.

The result? Ironically, she felt more like a leader.

By being honest and vulnerable, her employees appreciated the transparency and showed her support. And her kids didn’t seem as anxious or annoyed with her.

It can be hard not to give in to feelings of frustration and let those feelings Act for us. But that’s why the practice is called Strength—it can be a heavy lift. Having Strength means acknowledging our feelings, unlocking our choices, and showing up thoughtfully.

As Ryan Reynolds (or any Thoughtfully Fit leader) will tell you, building Strength takes practice. But after a while, defeating our supervillains—or attending our staff meetings thoughtfully—becomes easier. Watching a hero movie for inspiration doesn’t hurt either. Speaking of which, I have some Free Guy movie tickets to buy!

The next time you’re up against a villainous challenge at work, try engaging your core and unlocking the power of Strength.

Pause. When a workplace challenge has you feeling frustrated or stressed.

Act. Slip into your hero suit and face your villain with Strength.

When we choose our actions consciously, we can bring out the hero inside of us and lead with intention.

“You are stronger than you believe. You have greater powers than you know.” – Wonder Woman

I’m here cheering you on….in my own superhero suit (thanks to the person who anonymously sent it to me for my playfulness challenge)!

Looking for another way to increase your Thoughtfully Fit Strength? Check out David Foster Wallace’s viral commencement speech at Kenyon College. He discusses the importance of having control over your thoughts and consciously choosing what you give attention to. Team member Kara Barnes enjoys listening to this speech to regain some life perspective.