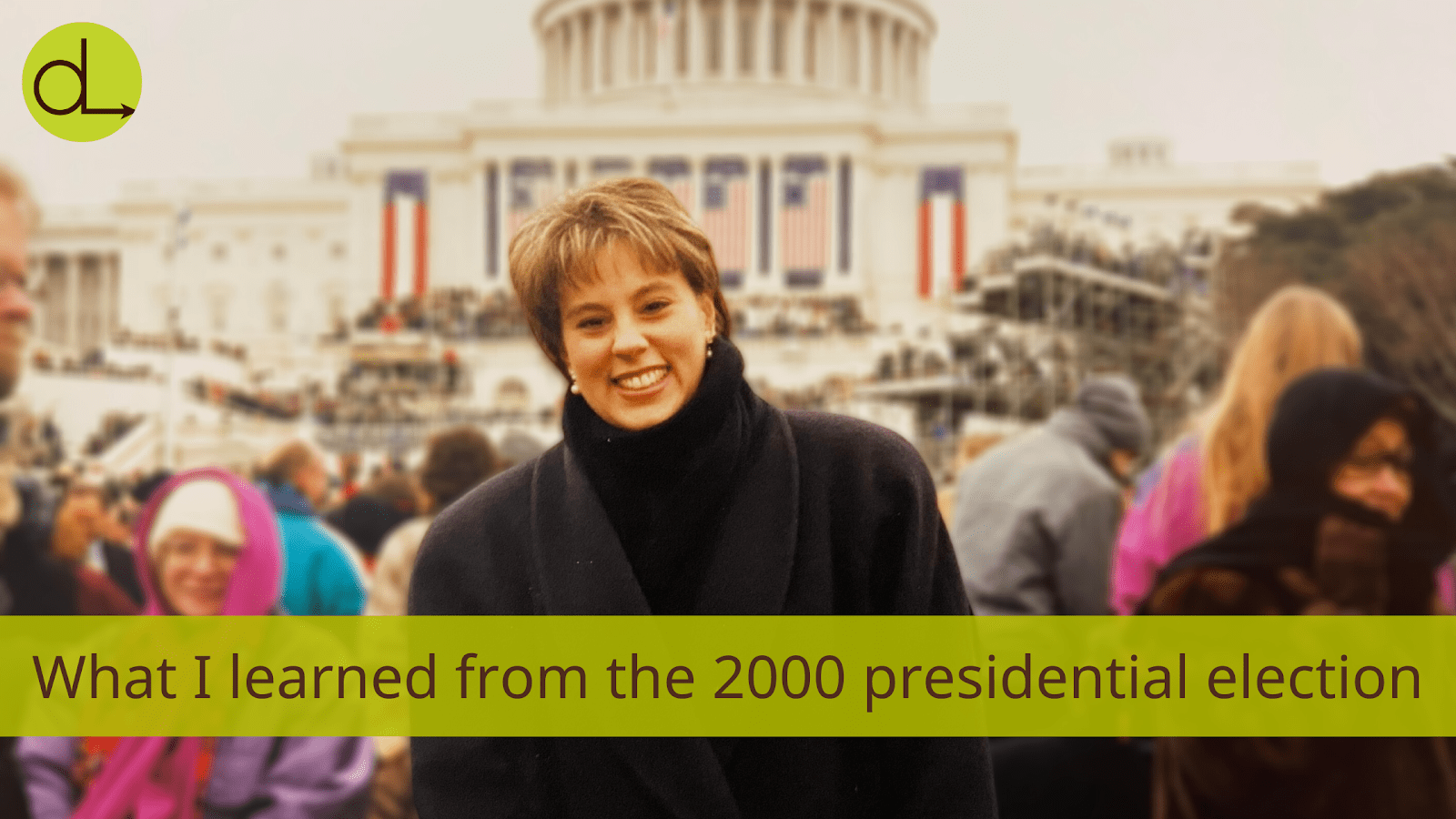 Back in 2000 (what feels like a lifetime ago!) I did advance work on a presidential campaign. I moved out of my apartment, put everything in storage, and traveled full-time across the United States. I’d arrive in a new city every week—in advance of the candidate—to make sure the venue was ready for the thousands of people who’d show up.

My travel schedule was so intense that I got in the habit of pulling the phone book out of the hotel nightstand and putting it on the floor next to my bed—so when I woke up I could remember what city I was in.

By the time I got to the campaign headquarters I was spiraling, when I ran into my colleague Kimberly who was cool as a cucumber. I asked her, admittedly with a hint of judgement, “How can you be so calm?” Her response stays with me to this day:

“We can’t fast-forward to the result. We’ll find out who wins tonight. So why waste energy fretting about it?”

That was not what I wanted to hear. Why waste my time? Because I want to know what’s going to happen! The waiting is killing me. I’ve given up my entire life for this campaign over the last year.  I’m not going to feel better until I know how it turns out.

(Incidentally, she was wrong! We didn’t find out who won that night. It’d take a few months of hanging chads in Florida—and a Supreme Court ruling—before a winner was declared.)

But she did have a point. I ended up spending that election day thinking about what could happen, what I wanted to happen, what I didn’t want to happen, and what it would mean for me. The control freak in me just couldn’t let it go.

I never could’ve imagined what actually happened. And I never would’ve guessed my work on the campaign would continue after election night—when I got on a plane at 5am to Florida to spend 38 days working on the recount.

Twenty years later, I’m not working on a political campaign, but I still find myself wishing I could fast-forward to know the winner of the upcoming election.

When You Can’t Control the Outcome, You Still Have Plenty of Choices

It’s not just election results that lack a fast-forward button. The result of a sales pitch or a budget vote. The outcome of a conversation with a boss. Being awarded a contract, a promotion, a project—or not. Finding out who’s going to win the big game.

There are a lot of situations where we want to know what’s going to happen. And even in the case of a big presentation or a job interview, there’s only so much we can do to prepare. At some point, we just have to wait. There’s no fast-forward button.

What’s left to do when you can’t control the outcome? Choose how you want to handle the waiting. And there are a lot of choices. You could:

And this is just the start of your choices. Are some choices harder than others? Of course. But they’re still choices you have.

So here’s your one-minute workout for this week—or any other time you find yourself wishing you had a fast-forward button. Engage your core.

Pause: Give yourself a moment to get off autopilot—especially if you’re feeling anxious or spiraling.

Think: How do I want to be while I’m waiting? What can I do to get closer to how I want to be?

Act: Once you decide, act in the way that you choose…thoughtfully.

Rest assured, this is a one-minute workout I’ll be doing a lot over the next six days! You can too.

P.S.– Does your team need to have a conversation about this or another tough topic? Check out the free resources at darcyluoma.com/communication to get started.