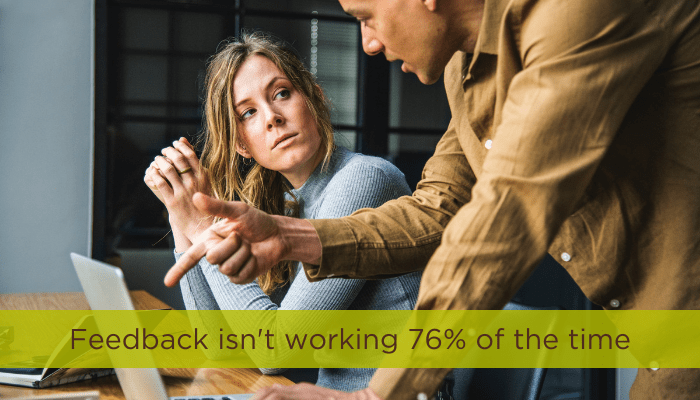 Feedback Isn’t Working 76% of the Time

So clearly it’s time to rethink how you’re giving feedback!

When more companies had a strict top-down structure and clear hierarchy, traditional feedback made a lot more sense. These days, however, teams tend to have a more fluid structure with some members working remotely, so it’s probably time to update the way we interact with each other and learn from past mistakes.

Not only that, but managers are no longer there just to make sure everyone is getting their job done. They now work to harness the creativity of their team, encourage collaboration, and deal with more complex problems.

There are several things that make traditional feedback, done through performance reviews or other scheduled conversations, less effective.

First, it often comes long after the event that you are reacting to since it is often only offered intermittently.

Dog trainers will tell you that there is no sense in punishing a puppy for something unless you catch them in the act. If you yell about your chewed up shoe, but it’s been four hours since they chewed it, they have no idea why you are yelling at them. They won’t know that means don’t chew shoes, they will just learn that you are scary!

People are the same. Hearing about what could have been done differently on a project that was finished a month ago probably isn’t going to lead to any real change in behavior.

In addition to the timing issues, feedback often feels like a one-way street. Employees will feel more engaged in the solutions if they are given the space to help create them. Allowing for feedback to be more of a conversation will give space for everyone’s ideas to be heard. That’s where coaching comes in.

There is definitely still room to give feedback and learn from past performance. However, there are a few tricks from coaching that can have a greater impact than feedback alone:

None of us like wasting our time, so start making your efforts to assess and improve performance count! Put on your coach hat, and see what happens.

If you like the idea of coaching at work but need a little more help, I regularly teach Take a Coach Approach to Managing at the University of Wisconsin-Milwaukee. Check out my events page to find the next time you can join me. Hope to see you there!