How DO you get out of Dodge, anyway? 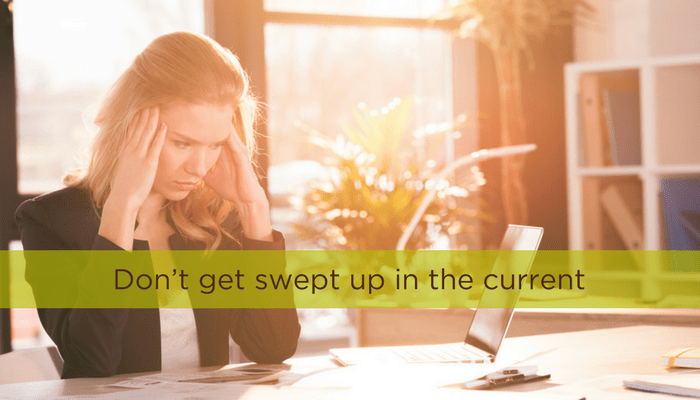 If only controlling your own energy and behavior was all it took to live a Thoughtfully Fit life! However, our lives are filled with other people who may have different ideas about how today is going to go.

Does your day ever feel like a game of dodgeball, where all day long things come at you? And even though you know the balls are coming, you never quite know when, or where, or from whom, or at what intensity. When they come, you have a couple of choices. You can spend your whole day diving to the ground and praying that no one else throws a ball at you, OR you can catch the balls. And then it’s up to you whether to call a cease-fire or throw it back at them. Or get the hell outta Dodge!

This month we’re focusing on AGILITY which is the final external practice of Thoughtfully Fit.

If you do not pause and think before acting, what happens is that you REACT to whatever the other person is doing. You get defensive. You match anger with anger. But agility is about slowing things down, so you can RESPOND instead. You catch the ball and gently toss it back (even though you might really want to hit someone in the head with it).

When I worked in Senator Kohl’s office, we had a number of interns who were responsible for answering the phones. We would get calls from constituents on all kinds of topics. Providing excellent customer service was one of Senator Kohl’s top priorities, so we always set out to hire capable and compassionate staff. There were times, though, when we had particularly challenging calls from angry constituents who wanted someone to blame for their troubles.

I would be sitting in my office and I would hear my otherwise kind, competent intern get louder, and then angrier. And every time this happened, it was because they let the other person’s frustration become their frustration. There was one time I heard, “Ma’am, that’s a state issue. You’ll need to contact the state office…. Calm down! Because it’s a state issue….  It’s not a federal issue. Can I give you the number for the state office?” He was getting louder…and louder…

Don’t get swept up in the current

He was getting swept up in the current. We’ve all been there, right? Someone is angry. We get defensive. In our attempt to set the record straight, the other person gets more adamant about their position. Now YOU are frustrated and angry. Which gets the other person more frustrated, and around and around you go. Situations like this require agility. You have to be able to work against that current instead of getting swept up.

Going back to my intern, as you might guess, this call eventually got routed to me. I paused for a moment, preparing myself for what would be on the other end of the phone. Not surprisingly, just after picking up and saying, “This is Darcy,” I got an earful! But I let her say everything that she had to say. And in the end, the intern was right. This was a state issue and we wouldn’t be able to help her directly. But that’s not what I said first. The first thing I said was, “It sounds like this has been extremely frustrating for you.” There was a pause and then you could hear the change in her voice. She said, “It has been frustrating! I need to get this check.” And you could feel an energetic shift and softening. I then told her, “I’d love to help you. Do you have a piece of paper and a pen? Let me give you the phone number of the state agency that has jurisdiction over this issue. Here is exactly what you should say to get the help you need on this issue…..”

Go with your own flow instead

What is fascinating is that I told her the exact same thing that my intern was trying to tell her. But it was done in a Thoughtfully Fit way that allowed the message to get through. After years of practice and dealing with a LOT of angry people, I have learned how to stay calm and bring a different energy. I didn’t get swept up in her energy, I went with my own flow.

Agility is about empathy and compassion. It requires you to pause before reacting, think about what the other person wants or needs, and then to act by responding more consciously.

Pause and think: Where do you get triggered and REACT instead of RESPOND? How could you have greater agility to by pausing and thinking before acting? How can you stop getting hit by all the balls that are coming at you, and learn to catch them and take charge of what happens next? Good luck getting out of Dodge, I can’t wait to hear how it goes.